Adani Ports and Special Economic Zone Limited (APSEZ) is one of the largest conglomerates which operates port services, logistics, infrastructure leasing and other ancillary services. APSEZ is India’s largest Ports Developer and Operator Company. APSEZ has built, acquired and developed a portfolio of ports infrastructure and services across India. The ten strategically located ports and terminals represent 24% of India’s port capacity, cargo handling and servicing. APSEZ was established in 1998 and has grown exponentially over 19 years. In logistics business, the company has 24 berths in India’s largest port- Mundra Ports.

Below is the breakdown of the company’s different businesses:

APSEZ handles all types of steel cargo including Plates, Beams, Coils, Pipes, Slabs, Bars, Billets, and products requiring specialized operations including large dimension Steel Plates/Beams/Pipes. Mundra port has Goliath cranes with vacuum lifters for scratch-free handling of sensitive cargo and a steel yard spread over 1,50,000 sq meters which can handle up to 6 MMT of steel per year. Steel cargo is handled at Mundra and Hazira.

APSEZ has liquid cargo port capabilities at Mundra and Hazira. The berths are equipped with tank farms to ensure safe and efficient handling of liquid products in big parcels. The cargo handled includes vegetable oil, chemicals and petroleum, oil and lubricants.

APSEZ container services include transportation of automobiles which was established in 2009. Mundra port serves at a gateway port for automobile companies situated in Delhi, NCR, Rajasthan and Gujarat region. Mundra port handles import and export of cars, buses and trucks.

APSEZ provides dredging and reclamation solutions for port and harbor construction services. APSEZ has a fleet of 19 dredgers with the largest dredging capacity in India. APSEZ also has a fleet of support vessels and equipment such as Multi Utility Crafts, Survey Vessels, Floating Cranes and Jack-up Barges. The marine services include bunker, fresh water, ship stores, waste disposal and repair facilities at Mundra, Tuna, Dahej, Hazira and Dhamra.

Maritime transport in India accounts for 95% of trading by volume and 70% trading by value. The country has 12 major ports and 200 minor and intermediate ports. The cargo traffic was 1,750 million metric tons (MMT) in FY17. The ports and shipping industry plays an important role in the country’s trade and commerce. India has a coastline of approximately 7,517 km. The Government of India has played an important role in promoting the ports sector by allowing 100% FDI under automatic route for port and harbor construction and maintenance. The government has also given a 10-year tax holiday to enterprises that develop, maintain and operate ports, inland waterways and inland ports.

The capacity addition at ports is expected to grow at a rate of 6% per annum till 2022. Indian ports are expected to add 275-325 MT of capacity each year. Under the Sagarmala programme, the government has taken up modernization of 189 ports, which involves an investment of $22 billion. This project is expected to be completed by 2035. The ministry of shipping has set a target of 3,130 MMT capacity by the year 2020. 50% of this capacity would come from non-major ports and participation of private sector.

Kandla Port Trust: is a seaport in Kutch district in Gujarat state. It was constructed in 1950 as a chief seaport serving western India. It is India’s largest port by the volume of cargo handled. It is also one of the busiest ports in India due to private sector participation. It is well known for handling crude-oil cargo, mainly for Essar Oil’s Vadinar refinery in Gujarat. The port has 4 berths of clean cargo capacity and has a depth of 14 m, capable of handling 75,000 dead weight ton vessels.

Paradip Port Trust: Paradip Port has 20 berths with a minimum draft of 13m and can accommodate vessels upto 90,000 DWT. A fully automated coal handling plant can handle upto 20 million tonnes of coal imports per year. A single point mooring system handles Very Large Crude Carriers for Indian Oil. In 2015, the entry to the port was dredged to 18.7m to handle Capesize Vessels

Mumbai Port Trust: Mumbai port is a natural deep water port. It is an autonomous corporation wholly owned by Government of India. Mumbai port has three enclosed wet docks with 8 berths of 6.4m depth, 14 berths of 6.7m depth and 21 berths of 21m depth. The port has four jetties for handling Crude and other Petroleum products, which have a draft of 12.2m.

Chennai Port: is the second largest container port in India. It is the third oldest port among 13 major ports in India. The port is a major hub for containers, automobiles and project cargo in India. It contributes mainly to imports of Oil and Automobiles and exports of groundnuts, granite and ores.

Port of Kolkata: is the oldest operating port in India and was constructed by the British East India Company. The port has two distinct dock systems – Kolkata docks at Kolkata and deep water dock at Haldia Dock Complex, Haldia.

Cochin Port: is a major port in the Arabian sea and one of the largest ports in India. The International Container Transhipment Terminal (ICTT) is a part of the Cochin port and is the largest container transshipment facility in India. The port is governed by Government of India through Cochin Port Trust (CPT).

The logistics sector is important for economic growth as it involves management of flow of goods meant for consumption by other industries. This sector comprises of shipping, port-services, warehousing, rail, road, air-freight, express cargo and other value added services. The logistics market in India is expected to reach $307 billion by 2020. The global logistics sector generates over $8 trillion annually and represents around 11% of global GDP.

India spends 14.4% of GDP on logistics against a global average of 8%. Logistics in India is inefficient due to lagging infrastructure, lower average trucking speeds, congestion on roads and in ports etc. Excessive taxes and toll expenditures also add to the expense. As shown by the graph below, transportation costs in India are much below US and China due to lesser distances. However, other costs (taxes, losses etc) are much higher in India.

Some of the issues and challenges faced by the logistics sector in India are explained below. Indian has a slower transit time for movement of cargo through road and shipping networks. In terms of transportation through shipping channels, transit time is affected due to lengthy custom clearance processes and a number of intermediaries required for bringing products in and out of the country. The road logistics network is affected due to poor infrastructure as national highways constitute only 2% of the overall road network. In addition, toll collection, inter-state checkpoints and other stoppages lead to higher transit times. The logistics are also affected due to lower standardization of container cargos. Movement of cargo within the country is affected by inefficient use of rail and inland water networks, thus leading to inadequate transit gateways which hamper efficient movement of goods. Air transport is the fastest but constitutes a miniscule 1% of total cargo due to higher costs. 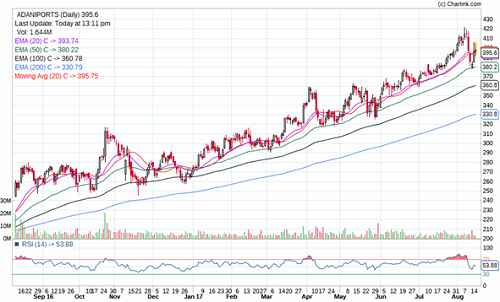