40.34% of the Bank’ operating revenue came from non- funded segments such as fees and commissions for services. 39 % of total deposits with the Bank were in the form of low cost CASA (current account and savings accounts) deposits on which the Bank pays a lower rate of interest which helps the Bank in maintaining a high rate of net interest margins.

Axis bank reported strong core performance on back of strong NIM (3.93%) and healthy loan growth (23.2% YoY). Although operating profit came strong at 26.8% YoY on back of healthy revenue growth along with containment of opex (C/I ratio fell by 110bps QoQ), PAT (18.4% YoY) grew at mod- erate pace (in-line with our expectations) due to higher pro- visions (2.5x YoY). Reported NIM came at 3.93% in Q3FY15, much ahead of management's medium term guidance of ~3.50%, largely aided by improvement in LDR (410bps QoQ) 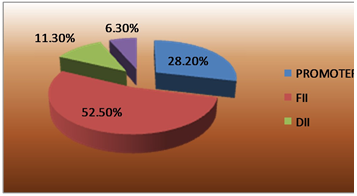 Although headline NPLs have been holding well contrary to street expectations, high exposure to non-operational power portfolio remains a potential risk, in our view. Fresh impair- ment (Rs.8.4 bn) remained way below the management's guidance (Rs.65 bn for FY15). However, management has maintained its earlier guidance by factoring in higher re- structuring during Q4FY15 (Rs.20-21 bn in Q4FY15), as provi- sioning arbitrage ends between NPA and restructuring post FY15. At CMP, stock trades reasonable at 2.3x its FY17E ABV with healthy return ratios (RoE: 18- 19%, RoA: 1.8%). We are retaining BUY rating on the stock with revised TP of Rs.630-650. 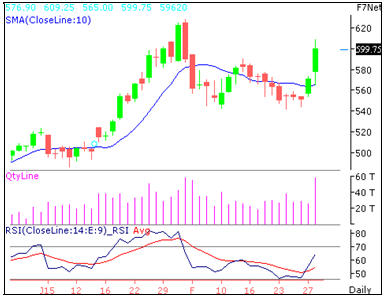 AXIS BANK LTD is looking strong on charts. We advise to buy around 610-620with stoploss of 590 for the targets of 650 lev- els. RSI is also showing upside momentum in it on daily charts.