Driven by incremental product launches in Europe and other geographies, superior project management skills, focus on measuring and monitoring quality, and its planned expansion Cipla will be able to grow over the next few years. We recommend BUY on the stock at a CMP of Rs. 650 to the target of Rs. 738.5 (Forward EPS 23.53x FY16).

Formed by Dr. KA Hamied way back in 1935, Cipla is one of the oldest ventures set up by an Indian in the pre-independence era. With 34 manufacturing facilities spread over seven different locations, Cipla has a gamut of therapeutic offerings ranging from simple anti-infectives to complex oncology products. The product basket includes ~2000+ products encompassing almost all therapies and over 40 dosage forms. The facilities have been approved by various agencies such as the USFDA, WHO-Geneva, MHRA-UK, TGA-Australia, SUKL-Slovak Republic, APVMA- Australia, MCC-South Africa, PIC-Germany, Danish Medical Agency, ANVISA-Brazil, INVIMA Colombia, NDA-Uganda, Department of Health-Canada and MOH-Saudi Arabia, among others.

Cipla’s business model focuses on having marketing partnerships with local companies across the globe. Most partners are large generic players in developed countries. The company has partnership deals with ~22 partners in the US and ~65 in Europe. Cipla has also formed strategic alliances for product development, registration, and distribution of its products. For the non-regulated markets, the company has maintained long-standing relationships with non-government organizations and institutions globally. However, going ahead, we may witness launches via the front-end model rather than the partnership model, especially in the US. Exports constitute around ~53% of total sales. The company exports both APIs and formulations to more than 170 countries including advanced regions such as the US and Europe. Cipla derives 34% of its export revenues from North and Latin America followed by 33% from Africa, 14% from Europe, 13% from Australasia, and 6% from the Middle East. On the product filing front, Cipla has filed ~200 drug master filings (DMFs) and 149 abbreviated new drug applications (ANDAs) with the USFDA cumulatively. It has 79 approved products so far in the US market.

As far as other geographies are concerned, the count is ~1000 DMFs for 100 odd APIs. Similarly, ~30 of Cipla’s products are pre-qualified for WHO tenders. The company spends ~6% of revenues on R&D. The company recently entered into an agreement to acquire two USbased companies, InvaGen Pharmaceuticals Inc. InvaGen Pharma has 40 approved ANDAs, 32 marketed products, and 30 pipeline products, for which it expects to get approval over the next four years. The above pipeline also includes five FTFs that represent a market size of ~$8 billion in revenue by 2018. The transaction is valued at US$550 million and is an all-cash deal. Cipla remains among the top five players, thanks to a gamut of product offerings, which covers almost all therapies built on a network of ~7500 medical representatives (Mrs) covering a doctor base of ~5,00,000. As per the latest AIOCD ranking (MAT September 2015), Cipla is second with a market share of ~5%. Breaking it down further, it's ranking in acute therapies was at 1 with a market share of 4.3%. Similarly, its chronic ranking is 2 with a market share of 6.8%.

Respiratory therapy accounts for ~20% of Cipla’s turnover. The company introduced Salbutamol tablets in 1976 and Salbutamol inhaler in 1978 for the first time in India. Since then, Cipla has consistently introduced new products for asthma, chronic obstructive pulmonary disease (COPD), and allergic rhinitis (AR). More recently, the company did the same in other diseases such as pulmonary arterial hypertension (PAH), lung cancer, and idiopathic pulmonary fibrosis (IPF). 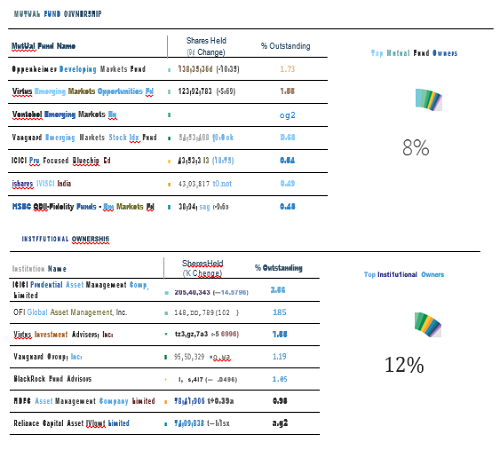 An export segment to be the growth driver

Cipla exports to more than 180 countries, with growth coming through marketing alliances and distribution tie-ups in various markets. Exports contributed 53% to the total turnover in FY2015, with Africa, the US, and Latin America constituting more than ~60% of total exports. In the US, Cipla has a strong product pipeline of 147 ANDAs, out of which, 79 are approved. Another long-term growth driver for the company is the launch of CFC-free inhalers in the regulated markets. CFC-free inhalers in Europe and the US address a potential market size of more than US$3bn.

CFCs are used as propellants in asthma inhalers which create the fine spray that is inhaled. Most countries in Europe have recommended that inhalers be CFC-free in order to address rising environmental concerns. CFCs are seen to contribute to the depletion of the ozone layer, leading to higher ultraviolet radiation. Many companies are replacing the propellant containing CFCs with another. Inhalers deliver a variety of asthma drugs such as salbutamol, fluticasone, budesonide, beclomethasone, and ipratropium.

Cipla is the market leader in inhalation therapy in India with a ~70-75% market share, has been selling CFC-free salbutamol and budesonide inhalers for about three years now. Investors have set great store by Cipla's plans to market CFC-free inhalers in Europe.

During the quarter, the company strengthened its foothold in the US through the acquisition of InvaGen Pharma and Exelon Pharma. The companies added a pipeline of ~70 ANDAs, of which 40 are approved (32 marketed) and 30 awaiting approval. The company is likely to add over USD250mn in FY2017. The deal is expected to conclude by December 2015. It will also provide manufacturing capabilities in the US. Overall, we expect the company’s exports to grow at a CAGR of 23.5% during FY2015-17E.

Cipla intends to triple its respiratory portfolio from $350mn currently to $ 1.1bn over the next five years with a 50% incremental delta from the existing business in India, South Africa, and Emerging Markets and the rest from expansion in North America and Europe. Cipla currently is in 50% of the addressable market for combination inhalers in Europe. Cipla launched inhalers in Romania in Q1FY16 and gained incremental market share in Hungary, Belgium whilst encountering slow growth in expanding inhaler sales in Germany. 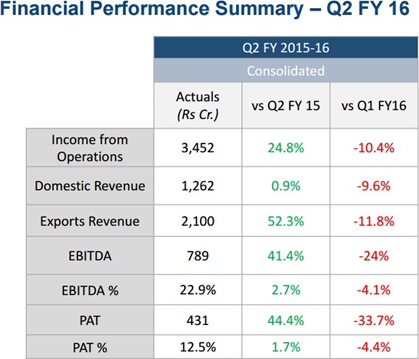 Increasing penetration in the domestic market

It is the market leader in key therapeutic areas such as respiratory care, anti-viral and urological. Cipla&rsquo's distribution network in India consists of a field force of around 7,000-8,000 employees. The company plans to increase its focus on domestic markets with new therapies such as oncology and neuropsychiatry in the offing. The company plans to focus on growing its market share and sales by increasing penetration in the Indian market, especially in rural areas and plans to expand its product portfolio by launching biosimilars, particularly relating to the oncology, anti-asthmatic, and anti-arthritis categories. Overall we expect the company’s domestic formulation business to post a CAGR of 12.5% over FY2015-17E, on the back of muted 1HFY2016 performance.

Cipla&rsquo's guidance of 20% revenue growth in FY16E appears conservative as it includes Nexium-driven revenues as well. More important was management commentary on the planned evolution of the respiratory franchise which is a key asset. The company expects respiratory revenue CAGR of c25% over FY15-FY20E to USD1.1bn from FY15 sales of USD350mn.

Regulated markets (US/EU) to account for nearly 50% of the franchise from under 10% currently. This is the first time the company has clearly articulated the trajectory and would be a key measurable in coming years.

Acquisition to strengthen US franchisee

H1 results were exemplary due to Nexium windfall. The management has maintained its revenue guidance of 20-22% with an improvement in EBITDA margins by 100-150 bps. The proposed acquisition of Invagen enlarging the US franchisee augurs well for the company. However, the recent Form 483 issued on Cipla&rsquo's Indore and InvaGen&rsquo's plants would be a short to medium-term concern to be wary about. On the domestic front, the push for OTC products augurs well for the company to complement the growth in Branded generics. However, the success of the front-end transformation process and European respiratory launches will have more bearing on the earning multiple than Nexium like windfalls 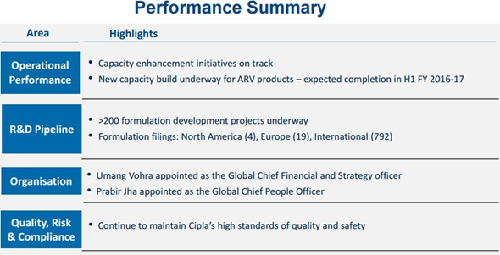 We value Cipla using DCF at price target of 738.5 with expected growth rate at 20.42% for FY16 and 18.04% for FY17. For valuation we assume that over the period company will keep capital structure unaltered and tax rate unchanged.

Driven by incremental product launches in Europe and other geographies, superior project management skills, focus on measuring and monitoring quality and its planned expansion Cipla will be able to grow over the next few years. We recommend BUY on the stock at CMP of Rs. 650 to target of Rs. 738.5 (Forward EPS 23.53x FY16). 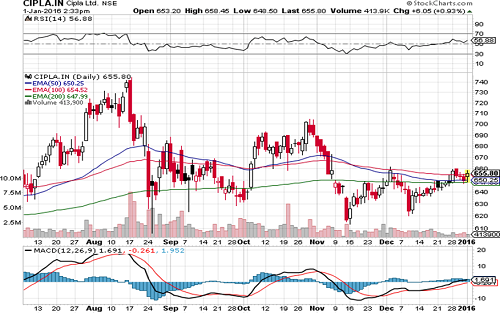