Cipla Ltd is one of the leading pharmaceutical companies in India, incorporated in the year 1935, founded by Khwaja Abdul Hamied. In the same year on Aug 17, Cipla was registered as a public limited company with an authorized capital of Rs 6 lakh. The company focuses on development of new formulations and has a wide range of pharmaceutical products. Cipla has over 1500 products in 65 therapeutic categories available in over 50 dosage forms.

Cipla’s Q2FY19 results were weaker-than-expected, there was a fall of 11% YoY in its net profit for the second quarter at Rs 377 crore when compared to last year, and operating margins was also low by 2.2%, mainly due to high base of restocking in the domestic market and a fall in the tender opportunity in South Africa and other emerging markets. Some of their tender businesses are growing 40% lower than last year. But company’s fundamentals are good and they are focusing more into new products. They have invested in R&D about 8.5% of their revenue to improve their product quality and this will show results in 3rd & 4th quarter. Considering all factors, we recommend to buy this stock for long term.

Cipla, a global pharmaceutical company, offers active pharmaceutical ingredients and formulations in various therapeutic areas such as women’s health, cardiovascular, children’s health, dermatology and cosmeceuticals, diabetes, HIV-AIDS, oncology, infectious diseases and critical care, malaria, neurosciences, ophthalmology, osteoporosis, respiratory, and urology. The company is focused on agile and sustainable growth, complex generics, and deepening portfolio in Indian markets, South Africa, North America, and key regulated and emerging markets. Cipla is ranked 3d largest in pharma in India, 3rd largest in the pharma private market in South Africa, and is among the most dispensed generic players in the US.

The company develops and manufactures more than 200 generic active Pharmaceutical Ingredients used in making finished drugs. Cipla makes APIs for more than 300 partners around the world. The company is continuously adding to its development pipeline to expand its reach across key therapeutic segments. 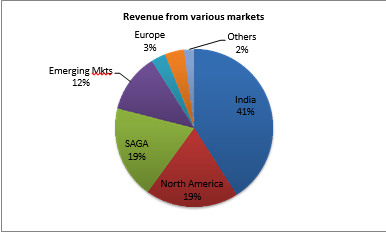 The company’s revenue from domestic market stood at 41%. The SAGA region which includes South Africa, Sub-Saharan Africa, and Cipla Global Access businesses declined 25% year-on-year in quarter 2 when reported in US dollars, largely behind the rebasing of the CGA business and the slower offtake in Sub-Saharan Africa and the lower tender sales in South Africa. As per YTD August IMS data, Cipla became the third largest pharma company in the South Africa private market with the 6.3% share.

Europe business declined by 14% on a year-on-year basis during the quarter, largely behind supply issues related to certain products and milestone payments in the previous year on account of the FPSM launch. But North America showed a rapid growth for this quarter, increased to 19% which is 2% higher than last year.

Indian Pharma industry contributes over 4% of the Indian GDP. There are close to half a million people directly, and over a million people indirectly employed in Indian Pharmaceutical industry making India as the second highest skilled biotech workforce in the world. Between 2000 -2017, FDI investment in this sector is over US$ 16 billion. India’s pharma export 2017-18 is over 16 Billion USD. Present government aims to make India a major hub for end-to-end drug discovery through initiatives such as ‘Pharma Vision 2020’.

While most of the sales come from US and European Markets followed by Asian countries, Indian Pharma companies contribute to over 20% of Global Generic business. Thanks to the pricing pressures from governments, Indian Domestic Pharma Market makes up of 10% of global sales account only for 3% in value terms. World medical spending is expected to grow by 3-6% CAGR to USD 1.4 Trillion from current 1.13 Trillion by 2022.

India exports 20% of World Generic; cost of producing drugs is 33% lower in India than US due to lower labor and production plant set up cost. Generic drugs are low-priced copies of off-patent medicines. They serve a critical purpose in healthcare provision allowing cheap competition to older medicines frees up resources to pay for newer innovative treatments. Generics drugs have made it possible to reduce the total cost of care as they cost 75-90% less than their branded equivalents.

The global generic drugs market reached ~US$ 245 billion in 2017. The use of generics saved the US healthcare system an amount of US$253 billion during 2016 and US$1.67 trillion over the last decade. Generic drugs make up >80% of the volume of drugs dispensed around the world, and the volume is expected to grow as more drugs lose patent protection. The global generic drugs market was pegged at US$185 billion in 2016, 17% of the global pharmaceutical market. Generic drugs accounted for 28% of the total pharmaceutical sales worldwide in 2017. Additionally, there were 847 generics approved in 2017, up by 37% from the previous record (633) in 2016 as well as 73 unique ANDAs approved during the same period.

Demand drives as the elderly population rises around the world and the need for multiple drugs increases. This could cause volumes to rise faster than the population growth as well as put a greater pressure on costs. Healthcare costs have risen consistently as a share of GDP in all developed countries and are expected to keep rising. In the US, healthcare expenditure increased to US$ 3 trillion in 2015 and is forecast to reach 20% of the GDP by 2025. As expenditure in developing countries catches up with the developed world, a greater share of these expenses is being borne by governments, pressuring budgets. While a number of factors drive rising healthcare costs and drugs account for only 10-15% of healthcare spending in most countries, pressure on healthcare budgets is unlikely to ease. The increasing focus on value in healthcare provision and greater price sensitivity from patients could support generics demand. 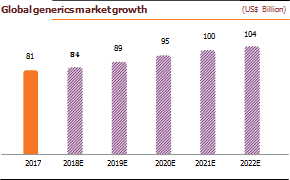 At about 4.5% of the GDP against the global average of 9%, India has among the lowest spends on healthcare. To cover over 100 million poor and vulnerable families, the Government has taken a hallmark step of launching a National Health Protection Scheme (NHPS). An annual coverage scheme provides 5 lakhs per family for secondary and tertiary care hospitalization. According to IQVIA, spending on medicines is projected to grow by 9-12% in the next five years compared to China’s 5-8%. In the ongoing financial year, this growth will thrust India forward to reach the list of the Top 10 countries.