Lupin is a fully integrated pharmaceutical company established in 1968 catering to a generic pharma market globally. With an unrivaled position in the US, India and Japan, Lupin has gone on to be the 4th Largest generic pharmaceutical company in the world by Market Capitalization. This position has been built on the backbone of a cutting-edge research, world-class manufacturing facilities and a well-established global supply chain.

Lupin’s September (Q2) revenues meet estimates. However, Strong forex tailwind and lower R&D costs led to an EBITDA growth of 2%, however PAT was 5% lower than estimated. US revenues continue to surge due to volume gains in Fortamet/Glumetza. Partial US recovery is expected from 2nd half of FY19, though the strength and sustainability of the recovery is contingent on levothyroxine dynamics as well as Solosec penetration. Forex gains combined with growth in US sales will improve margins and efficiency. Recently, Lupin has received an observation in the establishment inspection report given by the US health regulator for its Tarapur facility in Maharashtra and also received approvals from the US health regulator for its Clomipramine Hydrochloride capsules, and Potassium Chloride for oral solution. Considering all the point, we recommend “Buy” for this stock for long term.

Lupin, founded by Desh Bandhu Gupta in 1968, then an Associate Professor at Birla Institute of Technology and Science - Pilani, Rajasthan. Gupta passed away on 26 June 2017 and was succeeded as chairman by his wife, Manju Deshbandhu Gupta. Lupin gained recognition when it became one of the world’s largest manufacturers of tuberculosis (TB) drugs. Lupin today has a significant market share in USA, Japan and Europe in the cardiovascular prils and statins, Diabetology, asthma, pediatrics, CNS, GI, anti-infectives and NSAIDs therapy segments. Lupin also has a global leadership position in the anti-TB and Cephalosporinsegments.

Lupin’s entry into advanced drug delivery systems has resulted in the advancement of platform technologies that are being utilized to develop various generic pharmaceuticals. The company’s manufacturing facilities are spread across India and Japan, and have played a critical role in enabling the company to realize its global aspirations. Of International standards, these facilities are approved by international regulatory agencies including US-FDA, UK-MHRA, Japan’s MHLW, TGA Australia, WHO, and the MCC South Africa. 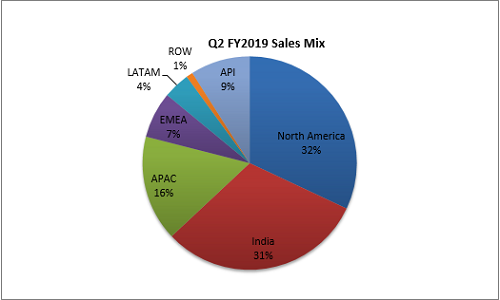 Lupin’s business covers the entire pharma value chain, ranging from branded and generic formulas, APIs, advanced drug delivery systems to biotechnology. The company’s drugs reach around 70 countries with a footprint that covers global markets such as USA, Europe, Japan, Australia as well as many emerging markets including India, Philippines and South Africa to name a few. In Q2 FY2019, sales from North America have been decreased around 6%, Indian market, company has played well and compare to last year, their sales has increased by 4% and also 2% increase in API. 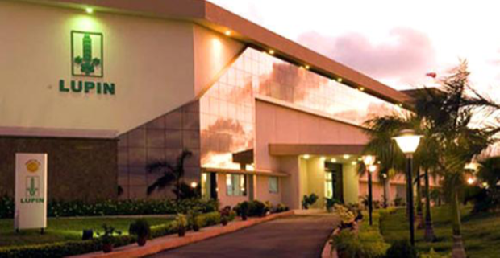 Indian Pharma industry contributes over 4% of Indian GDP. There are close to half a million people directly, over a million people indirectly employed in Indian Pharmaceutical industry making India as second highest skilled biotech workforce in the world. Between 2000 -2017, FDI investment in this sector is over US$ 16 billion. India’s pharma export 2017-18 is over 16 Billion USD. Present government aims to make India a major hub for end-to-end drug discovery through initiatives such as ‘Pharma Vision 2020’.

Where most of the sales come from US and European Markets followed by Asian countries, Indian Pharma companies contribute to over 20% of Global Generic business. Thanks to pricing pressures from governments, Indian Domestic Pharma Market which makes up of 10% of global sales account only for 3% in value terms. World medical spending is expected to grow by 3-6% CAGR to USD 1.4 Trillion from current 1.13 Trillion by 2022.

India exports 20% of World Generic, cost of producing drugs is 33% lower in India than US due to lower labor and production plant set up cost. Generic drugs are low-priced copies of off-patent medicines. They serve a critical purpose in healthcare provision: allowing cheap competition to older medicines frees up resources to pay for newer, innovative treatments. Generics drugs have made it possible to reduce the total cost of care as they cost 75-90% less than their branded equivalents. The global generic drugs market reached ~US$ 245 billion in 2017. The use of generics saved the US healthcare system an amount of US$253 billion during 2016 and US$1.67 trillion over the last decade. Generic drugs make up >80% of the volume of drugs dispensed around the world, and the volume is expected to grow as more drugs lose patent protection. The global generic drugs market was pegged at US$185 billion in 2016, 17% of the global pharmaceutical market. Generic drugs accounted for 28% of the total pharmaceutical sales worldwide in 2017. Additionally, there were 847 generics approved in 2017, up by 37% from the previous record (633) in 2016 as well as 73 unique ANDAs approved during the same period.

Demand drives as the elderly population rises around the world, the need for multiple drugs increase. This could cause volumes to rise faster than the population growth as well as put a greater pressure on costs. Healthcare costs have risen consistently as a share of GDP in all developed countries and are expected to keep rising. In the US, healthcare expenditure increased to US$ 3 trillion in 2015 and is forecast to reach 20% of the GDP by 2025. As expenditure in developing countries catches up with the developed world, a greater share of these expenses is being borne by governments, pressuring budgets. While a number of factors drive rising healthcare costs and drugs account for only 10-15% of healthcare spending in most countries, pressure on healthcare budgets is unlikely to ease. The increasing focus on value in healthcare provision and greater price sensitivity from patients, could support generics demand. 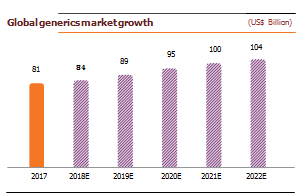 At about 4.5% of the GDP against the global average of 9%, India has among the lowest spends on healthcare. To cover over 100 million poor and vulnerable families, the Government has taken a hallmark step of launching a National Health Protection Scheme (NHPS). An annual coverage scheme provides 5 lakhs per family for secondary and tertiary care hospitalization.

According to IQVIA, spending on medicines is projected to grow by 9-12% in the next five years compared to China’s 5-8%. In the ongoing financial year, this growth will thrust India forward to reach the list of the Top 10 countries.