Since 2018, Maruti’s EBITDA margin has been falling and dropped to 9.2% in FY20 due to rise in raw material price and operating expenses. The company posted a 10.3% EBITDA margin, up by 80 bps YoY in the latest quarterly earnings, mainly due to the subdued raw material cost and lower royalty payments.

We expect several headwinds like advertising & promotional cost and rise in raw material prices to put pressure on margin and would remain at an average of 11% for FY21E-FY23E.

However, Maruti has lost its market share in the UV segment, mainly due to competitors’ newly launched products like Venue, Sonet, and Triber. Maruti has been facing steep competition from other players, which puts pressure on the average selling price (ASP) of products and profit margin.

Current growth momentum is mainly due to the festive season demand and personal mobility in the wake of COVID -19. We need to monitor growth post-festive season, we expect an acceleration of growth could be lower. We believe that revenue would grow at a CAGR of 4.8% for FY20-FY23E.

Trading at a richly valued price

Even key global automotive industry players are on average trading at EV/EBITDA of 15.4x of FY23E EBITDA.

We believe the operating margin to remain at an average of 11% for the Fy21E-23E, mainly due to a rise in raw material prices and an increase in advertisement cost due to heavy competition.

For Maruti Suzuki India Ltd, the share of UVs in total domestic volumes was at 18.2% in H1FY21 v/s 16.6% in FY20. Although there was an improvement in the category mix; the company’s market share in MUV, Compact SUV, and Mid SUV segment was 35.4%, 22.8%, and 6.6%. Their offerings in this category are Brezza, XL6, S-cross, and Ertiga, which are witnessing intense competition from Hyundai&rsquo's Venue and Creta, Kia&rsquo's newly launched Sonet, and Seltos, Tata&rsquo's Nexon and Harrier and MG&rsquo's Hector.

In compact SUV, Maruti is already facing steep competition from Hyundai&rsquo's Venue and Tata&rsquo's Nexon and a newly launched Sonet by Kia. Sonet is eating market share and hurts Maruti&rsquo's share. Thus, the company’s market share has been come down from an average of 30%-31% to 22%-23%.

Maruti&rsquo's commentary suggests that demand for personal mobility is higher as compared to UVs post-COVID, indicating a down trading.

Heavy competition and lower demand could lead to a double blow for Maruti&rsquo's ASP and margin profile. 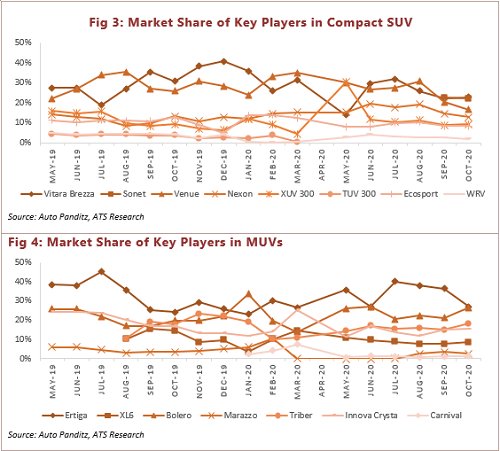 Greater challenges lie ahead in the UV segments, where Maruti is lagging in the industry and new product launches from key competitors are driving lower sales.

Sustain the market position but acceleration rate of growth lower

Maruti Suzuki India Ltd is a dominant player in Entry Level, Compact Hatchback, and Premium Hatchback, with a market share of 82%, 70%, and 51%. The company offers Alto and S-presso in the Entry Level segment, competing with Kwid and Redigo. Before the S-press, the company was facing healthy competition from Kwid at the entry-level. Maruti launched S-Presso in Septemeber-2019 and became a dominant player with a decrease in Kwid’s and RediGo’s market share.

We expect that a new product launch from any competitor would be the culprit of market share loss for Maruti in the future.

Maruti has a market share of ~72% in the compact hatchback segment with Swift, WagonR, Celerio, and Ignis. Maruti has No. 1 position and a dominant player with the flagship brand Swift in this segment. Maruti is the only player to offer 4 products in this segment compared to Hyundai’s 2 products and Tata’s Tiago.

In the post-COVID and Q1 FY21, the Entry-level segment grew by average growth of ~44%. Hatchback segment grew by average growth of ~19%, which shows that the car space has rebounded faster than the two-wheeler segment. This is mainly due to preferred personal mobility, digital marketing done by OEMs, and increased finance availability at a lower interest rate. The festive season demand has also been healthy as per checks with dealers.

We expect ROE would not improve much from 10.7% in FY20 to 11.4% in FY23E on the back of lower expectations of earnings growth. 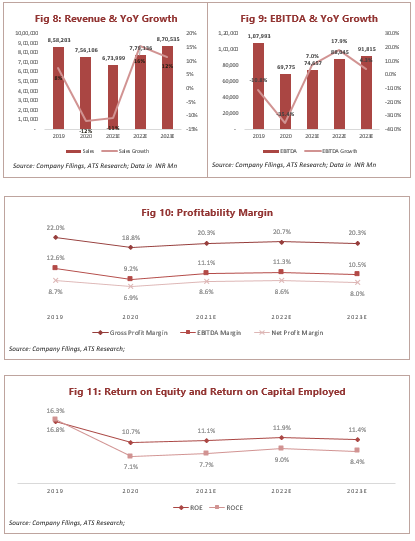 We expect several headwinds for margin expansion, heavy competition, product launches from new players and existing players would lead to single-digit revenue growth and EBITDA growth CAGR of 4.8% and 9.6% for FY20-FY23E, respectively.

Maruti is currently trading at forward EV/EBITDA of 23.4x FY23E, which we believe is a rich valuation.