Established in the year 1979, Mirza International Limited is India’s leading manufacturer and marketer of leather footwear and finished leather. The company is headquartered in Kanpur and has corporate and marketing offices in New Delhi. The company has a footprint across 30 countries. The company has 25% market share in men’s leather footwear in UK. Mirza International is the preferred supplier to leading international brands. Apart from supplying leather products to global retailers, the company also has global in-house brands – namely the Bond Street, RedTape and OakTrak. The company recently acquired brand Yezdi to increase its product offerings. The company has in-house design studios, strong supply- chain, marketing and distribution network and state-of-art manufacturing plants.

Mirza International limited has revenue of Rs.936 crores in FY17, up by 1% from FY16 revenue of Rs.926 crores. Although the net profits have grown at an average rate of 15.5% over the last 5 years, the PAT dropped from Rs.78.09 crores in FY16 to Rs.71.2 crores in FY17. Footwear and garment segments showed excellent growth in the domestic markets, whereas exports to UK and USA were down due to lack of demand in Q2 FY17. The company has launched new brands-Bond street and Red Tape Sports – both of which have been successful post launch. Mirza International now has products in mid-segment, premium segment and sports segment. Due to the under-penetration of branded footwear in the Indian markets, the brands Red Tape and Bond Street are expected to go a long way in terms of growth in sales revenue.

Mirza International limited is engaged in manufacturing and marketing leather products and leather footwear. The company’s operations are divided into two segments: the footwear division and the tannery division. The company operates an in-house shoe production facility and a design studio in London. Its brands include Red Tape and Oaktrak. The Red Tape brand’s product portfolio includes footwear for men and women, shirts, Jackets, denims, pants, shorts and accessories. Oaktrak is a brand of formal footwear including casual and urban styles.

Mirza International limited has been the leading Indian supplier of leather footwear to global brands since last 15 years. Approximately 75% of total revenue generated is from sales in international markets. 85% of the total overseas sales are private label goods supplied to leading international footwear companies. The company’s operates in 30 countries and the main overseas markets are UK, France, Germany and USA. 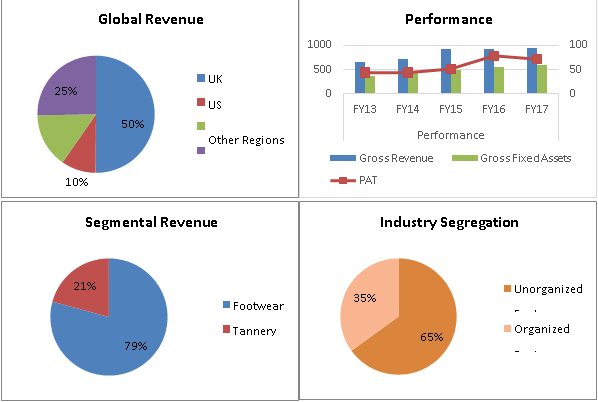 As seen from the graphs above, Mirza International’s major share of revenues come from UK (50%). The topline revenues and bottom line profits have grown steadily and fixed assets have grown at a healthy rate. 79% of the company’s revenue comes from footwear and remaining 21% comes from tanneries (clothing and accessories). However, the footwear industry is largely unorganized and thus only 35% of the industry is occupied by companies like Mirza International Ltd, Bata India etc.

Mirza International limited is one of the largest suppliers of leather footwear and leather accessories in the branded market in UK. London city is considered to be one of the leading fashion capitals of the world. Nearly 15% of the total men’s footwear supplied in UK is sold under the company’s own brands Red Tape and Oaktrak, while remaining 85% is supplied to reputed global brands. The company has also been aggressively expanding its presence in USA. The company’s sales are expected to grow by CAGR of 8.0% in FY18. UK and USA have different business models – UK has a local team of designers and sale is done directly, while USA market has agents for the company for sale execution. The company has entered into e-commerce space and is concentrating on branded selling. Nearly 10% of the turnover is being spent on brand building projects and ad campaigns. The company has its presence in all major e- commerce websites such as Flipkart, Myntra, Amazon, Snapdeal, Jabong and Indiatimes shopping.

The company operated in a highly competitive global market in a complex regulatory environment. Steep increases in rental cost, increasing cost of raw materials after the cow slaughter ban, ever changing consumer preferences and intense competition are some of the risks the company faces. The company plans to mitigate these risks by extending offerings in allied areas of garments and accessories. The company is now planning to leverage its leadership position in the manufacture of leather goods to replicate the success in the sports shoe segment. The company’s brands are well accepted in overseas as well as domestic markets and the company is planning to focus on expanding geographic presence in new countries and deeper penetration in the existing markets through aggressive marketing and distribution. The company plans to engage more customers through online platforms.

The company’s debt has been reducing over the past 5 years compared to the equity which is positive news for the shareholders as more of the net profits would accrue to them. The company has sufficient liquidity to finance day-to-day operations. The inventory turnover ratio has reduced over previous years which is positive news for the company. The revenues generated using existing assets have remained stable. The company’s margins have remained stable, although revenues have increased marginally. The market’s valuation of the company has been optimistic over the last few years due to the company’s growth prospects in both overseas and domestic markets. In summary, the company’s liquidity, efficiency and profitability has remained stable over the period under review and has a potential for improvement.

The Indian leather industry accounts for 13% of the world’s leather production of hides/skins. The country ranks second in terms of footwear and leather garments production in the world and accounts for 9% of the world’s footwear production. Indian leather industry has grown drastically, transforming itself from a mere raw-material supplier to a value-added product exporter. India’s export of leather and leather products for FY17 touched $5.67 billion against a corresponding value of $5.85 billion in FY16, a drop in growth by 3.23%. Export of different categories of footwear, which is valued at $2.77 billion, holds a major share of 49% in the Indian leather export industry. This is followed by leather goods and accessories with a share of 23%, finished leather 16%, leather garments 9% and Saddlery & Harness 3%.

The Government of India has identified the leather sector as a focus sector in Indian Foreign Trade Policy in view of its immense potential for export growth prospects and employment generation, especially for weaker sections, and supporting the economy through its foreign exchange earnings. Accordingly, the government is also implementing various initiatives for the growth of the leather sector. With the implementation of various industrial developmental programs and export promotional activities, the Indian leather industry aims to augment the production and exports, and thus create additional employment opportunities. The leather industry has positioned itself well to take advantage of new market opportunities, keeping in view its past performance, skilled manpower, innovative technology, increasing industry compliance with international environment standards and dedicated support of allied industries.

Indian footwear market is witnessing a steady popularity among teenagers and youth. They are using online platforms for purchase of footwear which is slowly occupying a significant share of total sales volume. The brick and mortar retail industry is witnessing intense competition from e-commerce offerings. The growing fashion conciousness globally has pushed the effectiveness of the leather

industry and competitiveness of the companies. India is the second largest footwear producer in the world, with footwear production accounting for 9% of global annual production of 22 billion pairs. India, annually produces 2.1 billion pairs, of which 90% are consumed internally while the remaining are exported primarily to European nations which include UK, Germany, Italy and France. Footwear exports from India have grown at a CAGR of 20% over the last 5 years backed by growing demand from european nations The footwear market in india is broadly classified into three segments – Men’s, Women’s and Kids. Men’s market is currently growing at a CAGR of 10%. Men’s market contributes around 60% of sales in the footwear segment as against women’s share of 30%. The women’s segment is growing at a much faster CAGR of 20%.

The scope for diversification into other products such as leather garments and goods has been enhanced in recent times. However, India has been unable to optimally utilize its resources due to low recovery ability of livestock, recent ban in cow slaughter, use of outdated technologies by most tanneries and footwear manufacturers, weak footwear components industry and limited presence of large scale manufacturing units. The fast changing fashion trends are difficult to adapt for the Indian leather industries. High competition from other Asian countries like China, Vietnam and Indonesia pose a risk to growth prospects of the Indian leather industry. Furthermore, these countries are meeting customer preferences by providing innovative leather products that have superior design and quality at lower prices.

Leather is durable and flexible material created by tanning animal hide/skin, often cattle hide. It can be produced at manufacturing scales ranging from cottage industry to heavy industry. Leather is used in making various goods – Clothing (shoes, hats, jackets, and belts), book-binding, leather wallpaper, and furniture covering. It can be produced in various types and styles.

The leather manufacturing processes can be divided into three fundamental sub-processes: preparatory stages, tanning and crusting.

The preparatory stages are when the hide/skin is prepared for tanning. Preparatory stages may include: preservation, soaking, liming, unhairing, fleshing, splitting, greasing, pickling and bleaching.

Tanning is a process that stabilizes the protein of the raw hide, making it suitable for a variety of end applications. The principal difference between raw and tanned hides is that raw hides dry out to form a hard inflexible material, while tanned material dries to a flexible form. Many tanning methods and materials exist. The most common tanning material is chromium. The hides, when finished pickling, are typically between pH 2.8 and 3.2. At this point, the hides are loaded into a drum and immersed into a float that contains tanning liquor. The hides soak, while the drum rotates slowly about its axis, till the tanning liquor slowly penetrates through the full thickness of the hide. Once the process achieves even penetration, the pH of the float is raised in a process called basification, which fixes the tanning material to the leather.

Crusting is a process that thins, retans and lubricates the leather. It includes coloring operation. Crusting culminates in drying and softening operation. 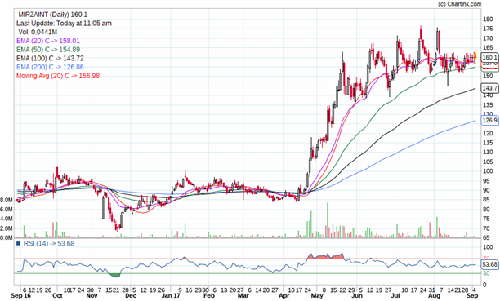