Nandan Denim is a family run company managed by Chirpal brothers, Mr. Ved Prakash Chirpal and Mr. Brijmohan Chirpal. The Company is involved in the business of manufacturing, trading and export of textiles. It commenced its operations in the year 1999 and in few years it has become India’s largest producer of denim fabric.

Nandan Denim is India’s largest and world’s 4th largest Denim fabric manufacturing company with present production capacity of 110 million meter per annum (MMPA). It has surpassed Arvind ltd which has a capacity of 108 MMPA.

The company has done successful backward integration. In the year 2014, the company has invested in doubling the spinning capacity from 54TPD to 124TPD. Now company has its presence in all the value chain of denim manufacturing.

Nandan Denim is a supplier to many well renowned brands: 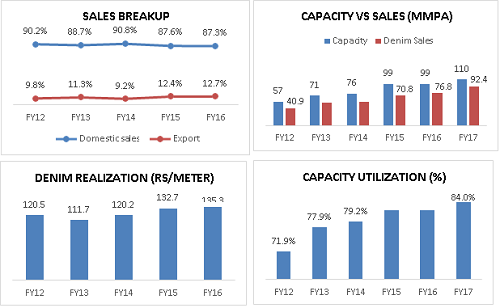 Company posted a robust increase in sales, an increase of 40% YoY basis. But Net Profit could not match with it due to increase in cost of raw material i.e. cotton. But cotton prices are expected to come down which would benefit the company in next quarter. Company is expected to show good growth in sales as well as net profit in coming quarters.

Denim has emerged as the most preferred apparel in India and has witnessed the fastest growth in fabric. Globally, the denim industry market stands at $113 billion in FY17 and is expected to grow to $153 billion by FY20. The Indian denim industry is witnessing a robust growth of CAGR 15%-18% per annum. For majority of Indian youth, denim has become a fashion statement. Fashion in India is influenced by westernization and denim is a symbol of it. Overall we see denim as a very promising industry. Women’s segment is expected to grow fastest. Kids segment in India is garnering a lot of attention off late. About 65% to 70% of the total production is consumed locally.

India has a great price advantage as it is the largest producer of cotton, which is the largest raw material and cost for the denim. With good monsoon and increase in production price, cotton prices are expected to get further down. Current per capita consumption of denim in India stands at 0.3 pairs per person compared to 8-9 pairs in developed countries. We can expect industry to grow at 15% further and biggest beneficiary would be industry leader like Nandan Denim.

India is one of the major suppliers of denim fabric in the world. India exports 35% of its production and remaining 65% is consumed locally. It is expected to see further growth in the share of export to 45% from current 35%. Denim is the biggest driver of textile sector in India.