Incorporated in the year 1983, Rico Auto was converted into a public limited company in Apr.'85. RAIL manufactures and supplies high precision fully machined aluminum and ferrous components and assemblies to automotive original equipment manufacturers worldwide. Its integrated services include design, development, tooling, casting, machining and assembly across ferrous and aluminum products of engine parts, transmission, chassis and breaking system. It is in the business of manufacturing and sale of auto components for two wheelers and four wheelers.

RAIL is tier-1 supplier of OEM and replacement market to many international and domestic automobile and engineering companies. After analyzing the company we expect company to outperform the auto ancillary industry with its high quality products. Make in India campaign, increase in sales and demand for automobiles will aid the growth of the company. We expect company to become debt free by the end of financial and to maintain a healthy financial position and improve its margins from the current levels aided by rise in sales.

RAIL has a well diversified product mix which will help it to reduce the risk factor associated with one single product or single end user focused companies. It has more than thirty two products under three categories namely engine parts, chassis and braking system and transmission system. It also supplies OEM’s, Specialized parts and Replacements parts to 2-Wheelers, Passenger Vehicles, Heavy Vehicles, etc which helps to reduce market risk associated with companies who supplies its products to a companies in a particular segment in the market ie reduction in demand for four-wheelers parts can be compensated by increase in demand for two-wheelers parts.

RAIL has fostered long-term relationships across a wide range of companies and is a preferred supplier to some of the leading companies both in India and Internationally. Rico’s global presence has been established mostly through exports, which began in the year 1994. It is a tier-1 supplier to auto OEM in the international market. Its global customers include reputed brands across developed markets. In the US, it supplies Ford, General Motors, Cummins, Caterpillar, and Detroit Diesel. In Europe, its clients include Ford, Land Rover, Jaguar, General Motors, Cummins, Caterpillar, Volvo, Perkins, and Honeywell. In Japan, supplies are made to Cummins, Nissan, Honeywell, and Matsusaka Engineering Company. The company is in the advanced stages of launching new products for other automobile OEMs both in Europe and North America. Alliances and joint ventures have been leveraged to grow in the global markets. It also helps to bring the stability factor associated with demand and purchase of products to the clients and also helps RAIL to grow along with the growth and growth prospects of the clientele.

Increase in demand to aid growth

With already completed expansions and modernization RAIL will be in a position to make the optimum utilization of the market potential and the demand for the products. The current capacity utilization stands around ~60% with the future of the automobile industry looking bright, RAIL will be able to utilize the current manufacturing capacities to the maximum and capitalize on the demand in order to increase the margins as the company doesn’t have much capital expenditure or expansion plans for the near term future. An increase in demand for the products will help subsidiaries and JV’s of RAIL to improve its performance which in turn will help RAIL to improve its overall performance.

Manufacturing in India is expected to ramp up at a greater rate than in developed markets. The ‘Make in India’ campaign focuses on the ease of doing business and is likely to move India ahead in the global manufacturing race. Globally, the sourcing of automotive components to low-cost countries is accelerating, especially in areas of machined components and assemblies. The opportunities for global growth in RAIL’s core area of business are immense. Cost competitiveness as well as its engineering and investment capabilities are increasingly meeting the global sourcing needs of automotive OEM and tier-1 suppliers. Its competitive strengths as an integrated full-service supplier and capabilities to understand customer requirements and meet tight deliveries schedule have resulted in creating confidence among global players. Leading European and North American OEM has selected RAIL as a single source supplier for critical engine and transmission components and assemblies.

Emphasis on exports to drive growth

Currently exports of products to Automobiles companies, System Suppliers and Commercial vehicles stands at ~20% of the overall revenue. With the improvement in the global automobile industry and RAIL will be able to increase the percentage of exports on overall revenue to ~25% to ~30% levels, which can make a big impact on the overall revenue, profits, and profit margin of the company as the exports have higher margins compared with domestic sales.

RAIL is the tier-1 supplier of OEM, specialized parts, and replacement parts to many major automobile and engineering companies around the world. With the growth prospects of the automobile and engineering industry looking bright, we expect RAIL could outpace the industry. With new product launches, increase in demand for its products, RAIL would be able to maintain a healthy financial position and improve its margins from the current levels. With sales of the sale of its 50 percent stake in FCC Rico to its Japanese partner, FCC Co Ltd., RAIL was able to reduce a considerable amount of debt from its books and plans to become debt-free by the end of 2015-16. Improvement in the performance of JV’s and fully owned subsidiaries can make a positive impact on the company’s overall financials.

The growth potential of the domestic market

India is one of the fastest-growing economies in the world with a favorable demographic pattern, fast-growing middle class, and increase in per capita spending on vehicles will work in the favor of the growth in the domestic automobile market, and RAIL will be in pole position to capitalize on the growth in the Indian Automobile industry as it provides OEM and replacement provider for most of the major players in the domestic market. With the current facilities available along with current manufacturing facilities increase in capacity utilization will have a big positive impact on profits and margins.

Indian auto component industry is one of the fastest growing industries and is riding on the success of the automobile sector. Coupled with growing demand and technological advancements, the auto component industry in India has emerged as a key market in Asia as well as in the world. The country currently supplies auto components to a number of international automobile makers, such as General Motors, Toyota, Ford and Volkswagen, amongst other. This industry accounts for 22% of the country's manufacturing gross domestic product (GDP). The automobile industry in India is expected to be the world's third-largest by 2016, with the country currently the world's second-largest two-wheeler manufacturer. Two-wheeler sales are projected to rise from 15.9 mn in FY13 to 34 million by FY20E. India's domestic market and its growth potential have been a big attraction for many global automakers.

The Indian auto industry is highly competitive with the presence of a large number of global and Indian auto companies. The auto sector alone contributes nearly 84.3% of the total turnover (OEM) and the rest belongs to the replacement market. The auto component sector clocked a turnover of USD 35.1 bn in FY14, recording a CAGR of 7.8% during the period of 2008-2014, and is projected to become the fourth largest automobile producer globally by 2020 with a turnover over USD 150 bn by FY20, according to Automotive Component Manufacturing Association of India (ACMA).

Currently, India is ranked 22 among global component exporting countries. China is at the third spot on the list led by Germany and the US. Indian auto component sector exports grew by 16.7% to USD 10.2 bn (Rs.614.9 bn) in FY14 from USD 9.7 bn (Rs.526.9 bn) in FY13. Europe is the leading marketplace with 38% contribution, while the US topped the list of top export destinations. Low labour costs, availability of skilled labour and high quality consciousness among Indian vendors have spurred the growth of auto component exports from India. Moreover, over the last few years, the structure of the customer base in the global markets has also undergone a major change. According to a joint study by ACMA and McKinsey, India will jump to 9th spot in exports by 2020 and the next imperative for the Indian auto component industry reveals that Indian suppliers still account for just 1% of overall global exports of USD 1,006 bn – indicating a significant upside opportunity for exports.

The study findings suggest that globalization in the auto-suppliers industry is likely to increase. Indian auto component industry can be broadly segmented into six major segments. Engine and drive transmission parts together contribute about 50% of the auto component industry production. Engine parts, which constitute 31% of the production, mainly comprise of pistons, engine valves, carburetors, fuel injection systems, camshafts, crankshafts and cooling systems. Drive transmission parts, which constitute 19% of the total production, include axle assembly, steering parts and clutch assembly.

Indian component manufacturers are well positioned to capture overseas opportunity in the coming 2-3 years The domestic industry’s focus on exports has been part of industry’s initiatives to counter the cyclicality in the domestic auto sector. Europe accounted for 38% of exports followed by Asia at 25% and North America at 21%. Exports to Europe increased by 14.5% over the previous fiscal, while exports to Latin America and Asia registered a growth of 16.5% and 5.4% respectively. The key export items include engine parts, transmission parts, brake system & components, body parts, exhaust systems, turbochargers etc. Indian auto component makers are well positioned to benefit from globalization of the sector as exports potential could be increased by up to four times to USD 40 bn by 2020 from current USD 1 bn.

Dependence of demand of end users

Being an OEM and replacement supplier to many companies scattered around various geographies, RAIL’s performance relies on the performance, and demand and growth of the companies which RAIL supply its products.

Being a capital intensive industry RAIL is exposed to the fluctuations in the price of raw materials which are used for the producing its products and it can make difference in the profit margins.

Competition from the unorganized sector 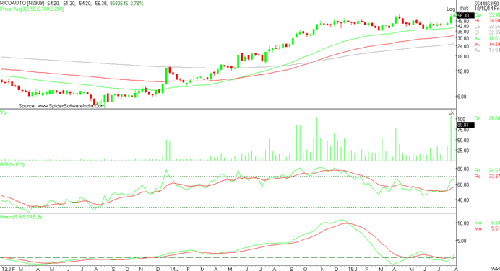