Tata Chemicals Limited is a soda ash producer and sodium bicarbonate producer. The Company is engaged in diversified businesses dealing in inorganic chemicals, fertilizers, other agri inputs, water purifiers, nutritional solutions and pulses. The Company operates through four segments: Inorganic Chemicals, which includes soda ash, salt, sodium bicarbonate, marine chemicals, caustic soda and cement, fertilisers, which includes fertilizers and other traded products. Other Agri-inputs, which includes Rallis India Limited's operations and others, which includes pulses, water purifier and nutritional solutions. The Company's products are used to make float glass and pharmaceuticals, and are used in the metallurgy and textiles industries. Its customers include manufacturers of soaps, detergents and glass. Source: Reuters

TCL being the largest player in chemical industry and it also have a significant market share in consumer products industry. With companies restructuring and capex plans, we expect the company to perform well in the medium and long term.

Tata Chemicals is the pioneer and market leader in India’s branded Iodized salt segment. With the introduction of an innovative, low-cost, nanotechnology-based water purifier, it is providing affordable, safe drinking water to the masses.

TCL is the world’s second largest producer of soda ash with manufacturing facilities in Asia, Europe, Africa and North America. Its industry essentials product range provides key ingredients to some of the world’s largest manufacturers of glass, detergents and other industrial products.

Its farm essentials portfolio the company has carved a niche in India as a crop nutrients provider. It is a leading manufacturer of urea and phosphatic fertilisers and, through its subsidiary, Rallis, has a strong position in the crop protection business. 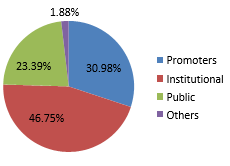 Tata Chemicals Magadi Limited’s (TCML) performance improved significantly after successful restructuring of operations carried out by mothballing the Premium Ash plant (PAM), right sizing of manpower and controlling fixed cost. TCML achieved a Standard Ash (SAM) production of 3,04,698 tonnes as against 2,67,567 tonnes during the previous year. PAM production was at 66,833 tonnes as against 2,07,223 tonnes during the previous year. Tata Chemicals Europe (TCE) has undertaken major restructuring initiatives. These changes included the termination of existing arrangements for the purchase of steam and electricity from the Winnington power station, the acquisition of the Winnington power station, right sizing of manpower and closure of the soda ash and calcium chloride manufacturing plants at Winnington. Decommissioning of redundant assets at the Winnington site was completed. Major modifications to the Winnington sodium bicarbonate plant have improved both product quality and production capacity. UK facility is supplying around ~90% of the country’s global soda ash demand. These restructuring efforts will help the company to increase its efficiency and product quality which in turn results will increase in margins.

TCL is trying to have a major push in terms of its consumer offerings with a primary focus on food-based products and targets to reach 18% of its revenues will come from consumer products by 2018 compared with 7% in 2012. As India is a fast growing economy huge opportunity in consumer foods business on the back of rapid urbanization, favorable demographic pattern, increase in per capita expenditure on packed foods and increase in awareness about product quality will work in favor of TCL mainly because of the goodwill and reputation of the TATA Group. As this business segment have low-asset, low-investment and high-return businesses and less working capital cycle and no issues related with macro-external factors such timely subsidy, availability of gas and international price trends. Tata Chemicals, the maker of branded salt and pulses, will create a new umbrella brand for its foods portfolio as it looks to treble revenues to Rs 5,000 crore in 5 years by entering newer product categories. The company's existing portfolio of pulses and spices under i-Shakti label will be migrated into a new brand " Sampann" which will also house future launches in the staples and food segment . Consumer spend is going up and the company aims to tap it. Tata Chemicals expects to up its salt capacity further by 0.3 mmt. The salt revenues could double to Rs 18bn from Rs 9bn in the next five years. Overall consumer business revenues could go up to Rs 35bn (from Rs 15bn at present salt, water purifier, pulses. The company is venturing into ready‐to‐eat and ready‐to‐cook categories. For nutraceuticals the management guided at revenues/net profit of Rs 1,500/400mn at optimum utilization over next three years. It said it could double this segment’s capacity and start a facility dedicated to exports.

Improvement in performance of subsidiaries and joint ventures

The revenue and margins of the company the fully owned subsidiaries and joint ventures are expected to improve in the coming quarters mainly due to restructuring of the companies both plants and business. With the increased growth and demand in mining, pulp and paper manufacture, water treatment, metal refining, textile processing, cleaning preparations, petroleum and metallurgical refining, iron and steel, aluminum, and drugs industries will further fuel growth in the company as these industries are the major end-user industry of the products. Increase economic growth opportunities in mainly East Asian, African, and American counties, TCL with its joint ventures and subsidiaries will help to increase the company’s revenue in a significant manner.

The Company reaffirmed its focus on higher value-added and branded products by launching the GranPlus brand of speckle grade soda ash. In line with the existing competencies of customer-connect, quality products, and distribution reach, the Company continues to be actively engaged in trading activities in the inorganic chemicals space. The trading portfolio, consisting of new and allied chemicals, will help the Company to explore new growth areas while catering to a larger portion of the customer’s spending. The Company continued to invest in branded offerings of sodium bicarbonate, branded volumes now account for 31% of the portfolio. This is in line with the Company’s strategy to offer value added branded variants as the domestic market matures and grows over a period of time leveraging its global product portfolio for greater consumer connect. The Company is an integrated manufacturer of basic and value-added chemicals, key among them being soda ash and sodium bicarbonate.TCE commissioned the modified sodium bicarbonate capacity at the Winnington site with increasing focus on products for high value segments will help the company to increase the percentage of revenue of value added products in total revenue and it will help the company to improve its overall margins because of higher margins in this product.

Tata Chemical have a capex plans of Rs.1700. over coming years (including maintenance capex annum across geographies, funding salt expansion in India, and soda‐ash capacity in the US). The capex estimates includes the capex needs of its 51% subsidiary Rallis India. The capex and expansion plans will help the company to capitalize on the market demand for the various products but also the modernization plans helps TCL to reduce the wastage and improve the efficiency and quality of the products. These capex plans also helps the company to restructure the its business verticals to more customer products business

TCL along with its subsidiaries have a well diversified portfolio of products will be able to capitalize on the demand for the products from different end user industries and customers. The company also have wide geographical reach through more than a lakh retailers and company owned outlets will help in increase its revenue by making available the product range though different channels. The economic growth and increase in demand in Asia, Africa and America can act as a supplement to growth of the company mainly because of the wide reach and product portfolio. And is planning to expand retail footprint to 2.5 million outlets from its current 1.43 million outlets.

India’s growing per capita consumption and demand for agriculture-related chemicals offers huge scope of growth for the sector in the future. Lured by the size and returns of the Indian market, foreign firms have strengthened their presence in India. From April 2000 to May 2015, total foreign direct investment (FDI) inflows into the Indian chemicals industry (excluding fertilisers) were US$ 10.49 billion.

The Government of India has been supportive to the sector. 100 per cent FDI is permissible in the Indian chemicals sector while manufacturing of most chemical products is de-licensed. The government has also been encouraging Research and Development (R&D) in the sector. Moreover, the government is continuously reducing the list of reserved chemical items for production in the small-scale sector, thereby facilitating greater investment in technology up-gradation and modernization.

The chemical industry in India is poised for explosive growth in the coming years. India’s population has grown nearly as large as that of China, with its consuming middle class accounting for about a third of its population. Disposable income in India is rising, potentially driving growth of chemicals consumption at exponential rates. India’s GDP growth exceeded 9% for the last fiscal year, fueling double-digit growth of its chemicals industry. India’s government has set in place policies and special economic zones to promote investment in its petrochemical sector, and several key domestic companies have unveiled ambitious expansion plans for the next few years.

The specialty chemicals sector is characterized by requirements for high-value products, high-volume requirements with expanding customer base, a product-driven market, and the addition of new participants at various levels of the value chain. Overall, the market is likely to grow at a Compound Annual Growth Rate (CAGR) of 13-14 percent. “Product customization and understanding of unique customer needs has been one of the key success levers for the Indian chemical industry. In terms of production value, the specialty chemicals sector forms about 18- 20% of the total chemical production in India,”

With Asia’s growing contribution to the global chemical industry, India emerges as one of the focus destinations for chemical companies worldwide. With the current size of $108 billion, the Indian chemical industry accounts for approximately 7% of Indian GDP. The chemicals sector accounts for about 14% of the overall index of industrial production (IP). The share of industry in national exports is around 11%. In terms of volume, India is the third-largest producer of chemicals in Asia, after China and Japan. Despite its large size and significant GDP contribution, Indian chemicals industry represents only around 3% of global chemicals.

Two distinct scenarios for the future of the Indian chemical industry emerge, based on how effectively the industry leverages its strengths and manages challenges. In the base case scenario, with current initiatives of industry & government, the Indian chemical industry could grow at 11% p.a. to reach size of $224 billion by 2017. However, the industry could aspire to grow much more and its growth potential is limited only by its aspirations. In an optimistic scenario, high end–use demand based on increasing per capita consumption, improved export competitiveness and resultant growth impact for each sub-sector of the chemical industry could lead to an overall growth rate greater than 15% p.a. and a size of $ 290 billion by 2017.

TCL have more than 35 subsidiaries and a number of joint ventures. The subdued performance of any of these can negative impact on the overall performance of the company.

The company has operations around the globe and major part of revenue comes in foreign currencies thus the company is exposed to currency fluctuations and low exchange rates can hamper companies cost and margins.

Balance Sheet as per rough estimates

We are positive on Tata Chemicals over the medium and long term and hence recommend a BUY at CMP of RS.419 and further add on declines between Rs.390 to Rs.385 for a target of Rs.470 to Rs.520 with stop loss maintained at Rs.370.